Letter to the Creator from the Earth 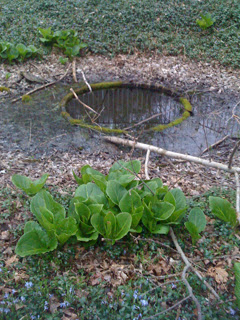 Letter below composed by my dad - received in an email this past weekend. Picture by me: photo of the first oil spring discovered in North America, in Cuba, NY (Oil Spring Reservation), about 4 miles from our cabin.

Over here. I'm the small blue planet orbiting a small sun in a small galaxy. You answered my request 65 million years ago for an asteroid strike and I want to say "Thank You" again for that. The dinosaur population had become untenable for my ecology. They were literally climbing over top of each other, slithering about, destroying the natural habitat for themselves and other creatures. Good riddance!

Sorry to be such a bother but I need your assistance again. The new threat to this world has become far worse than your dinosaurs ever were. They call themselves "Humans". They may be your darlings but they hate each other. They have discovered the resting places of all those rotting dinosaurs and have learned how to war over these deposits of dinosaur juice. They call it OIL. It has been bad
enough that their use of the juice, has caused a horrible pollution of the atmosphere but now they are ruining the planet's water supply. Vast quantities of the stuff are spilling into the oceans, killing your beautiful fishes and soon, "Oil rains" will fall upon the land masses, making plants and animals sick.

So please consider this request for another asteroid strike, say one about the same size as the other, except some birds actually survived the last one. I'll leave it up to you. I'll get by.

Just for laughs, these humans spend a great deal of time searching the universe for signs of what they call, "Intelligent Life". It's a shame they haven't found any signs of it here on this lovely blue world.