My friend Jennifer posted an interesting article on the subtle clues left by the makers of Arrival, as breadcrumbs to the internal connections within the story. I had made some similar observations - I saw the set and cinematic design as a light-box like staging of both ship and her home. The portal on the far plane horizontal-flat to the frame. The running of the camera lens along the ceiling grid lines mirrors that of the view inside the space ship.


This got me to thinking...
Other clues about communication with an alien intelligence; that such communication will be transformative. The shape of the ship is totemic, much like the monolith seen in 2001: A Space Odyssey. Moreover, the scenes of the humans touching their hands along the surface above them, is straight out of the Kubrik film. In 2001, this contact - a symbolic closing of sthe interface between two intelligences - causes a transformative change in the evolution of the human species. The touching-of-the-ship scene in Arrival is both a homage to 2001 - and a harbinger of the same transformation to come in Arrival, as it leads to the discovery of the language of the aliens, which itself (once learned and internalized) completely rewires Louise's brain and consciousness, catapulting her to a new evolutionary step. And by extension (eventually), that of the entire human species. 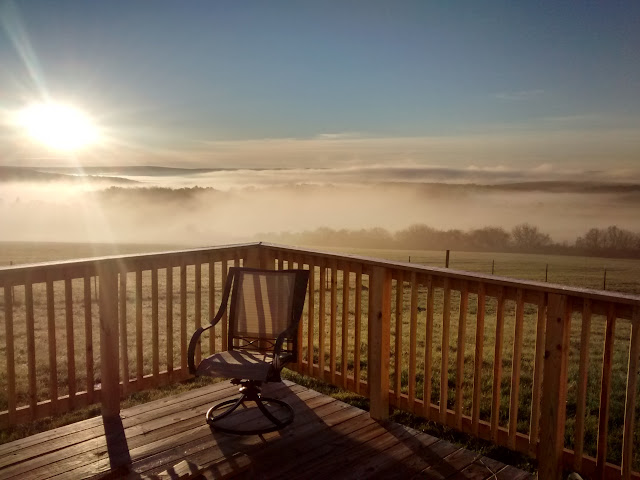 I watched the movie "Arrival" again with the fam - first saw it a few days ago - and it hit me even more profoundly the second time. Has me thinking about the nature of consciousness and time. And of personal experiences related to these... I occasionally have what I call "time slip" experiences where I have a vision (waking) or dream of an event in the future. The most recent was the Fort Lauderdale shooting on the day I was flying into that airport. My flight was delayed so I missed it, but some time prior to that I had a very strong and frightening dream / vision (it was really the latter - I was sitting up in bed working on my laptop when it happened), not of the specific event but of a warning. This took the form of a very close friend (a former work colleague) of mine suddenly appearing out of nowhere (like launching toward me) trying to warn me of something about to happen. Scared the living crap out of me. Then when the airport shooting happened, I knew (don't ask me how) that it was that event that I fortunately missed. This type of thing happens to me from time to time, sometimes years apart, sometimes months,  sometimes the vision is close to the (later) reality, sometimes vague; all are accompanied by a powerful shock, fear, sometimes panic. My youngest daughter Audrey has a similar problem. The most stark of these was back in early 2001, when she was about 16, she had a nightmare of 4 planes crashing into buildings. It was so frightening to her that she never wanted to fly again after that (this was a kid who was always flying - no problem prior to this dream). I discounted it as "just a dream" but then 9/11 happened. 4 planes, buildings, except that one plane never made it into a building.

So what the heck is this? Does our consciousness have the ability to "tap" into non-linear time and experience an event in the future or the past. I forgot to mention: I sometimes see events that happened in the past - extremely vivid as tho I am THERE. These only last seconds - like the span of a breath. But it's not me - it can't be (and no I don't believe in reincarnation). So what is the difference? If it's not me in the past (because I did not live in the past) as opposed to me in the future, then what is going on? One of these past time slips was around 30,000 years ago, somewhere in South America (I had that in my head when it happened - don't ask me how, - I just "knew" this); it was a most incredibly sad and monumental event in that affected an entire people at that time: the death of someone who was very widely known and loved. I could feel the intensity of grief; it was overwhelming. I remember every detail of the scene, the face of the dead woman - young, very pale with nearly-white hair, the tiny jewels in the side of her nose.

Something else I have often wondered about: when I was in my 30s I was invited by friend to take part in a teaching series by a Tuscarora medicine man (Ted Williams; he used to work at Kodak in Rochester NY where I lived at the time; he had since retired from that job, I think he was about 65-70 when I met him). The subject was study of plants for healing and medicinal purposes. There were lots of samples, slides, and I took notes galore though I had no idea what/if I would ever use them for. At one point on the 3rd night, he started talking very slowly. And it was very strange because I found myself in what felt like a trance state. The room was pin drop silent and no one moved, as though time stood still. I felt like I stopped breathing - it was that kind of state. He talked about how people are called to medicine (healing), to be a "medicine person" if you will. In his case, his father was a medicine man, but it was the death of his daughter at age 4 that caused him to enter his own path. When he said this, a kind of shock of recognition went through me like a thunderbolt. When my eldest was born (who at that time was 4 years old), on the day of her birth I had a very intense vision of her as a corpse. I saw her death. This obviously deeply upset me but I put it down to some type of postpartum anxiety (I was not depressed however). And yet I have carried it for years even to this day; the sinking feeling that I will live to see this. This is very hard to talk about. Then one year ago in December 2015 she discovered a massive tumor in her left breast - it was removed; the size of a lemon. She next had a bilateral mastectomy (Feb 2016). In the biopsy we learned that we were VERY VERY fortunate to catch it early - stage 1 cancer. She was living in Canada at the time. It was a nightmare to get her home. Her boyfriend completely fell apart and was of no support to her - even blamed her for making HIS life miserable. I finally got her to Florida where she is with me now. She has undergone follow-up treatment, reconstruction, etc. since then, all on an ACA plan (which has saved her life). Genetic testing has shown that she is not genetically pre-disposed to a reoccurrence though like any mother, I am still terrified. Anyway, I look back at this and wonder - was this the intense vision / anxiety I experienced when she was born?

In the movie Arrival, the central character Louise experiences the full span of her child's life from birth to death as a kind of endless loop. This is a gift from the alien race: the ability to live the moments of being with her child over and over, so that even when death took her from her, she is still ever present - still alive - because time is not linear, it is always fully accessible.

So anyway, it struck me, in the movie, Louise is not only given this gift of non-linear time, but the fact that she herself experienced an intense life shock - the death of her daughter - was it this event that enabled her consciousness (in the linear past) to be open to learning how to use the gift? In other words, does it require a kind of shock or dislocation event to launch us out of our conventional linear perception of time, into that of no-time / expanded time? Her future in effect, gave her the ability to experience the ability to perceive non-linear time gifted to her in the past. In seeing this in the movie, it made me think back to what Ted talked about - and it connected some dots for me.