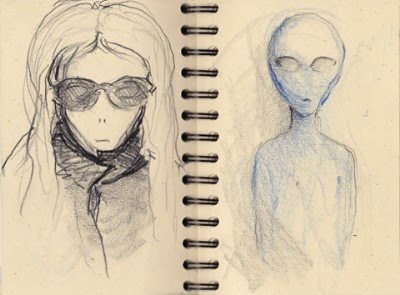 A snippet of a story I recounted in a recent chat: ...later encounters included a small elf-like creature (he was about 18 inches tall, funny shaped body and head) up at Cape Croker where I was attending an anishnaabe (ojibwe) "gathering of elders" event in 1996. After I saw this little guy, I asked an acquaintance (a local author who had connected me to attend the event) about it. He told me that there are several stories among the annishnabek about these small people, confirming what I saw. Another time while solo camping in new mexico I was sitting in my tent, getting ready to go to bed, when a blue entity came up through the floor of my tent (out of the ground below). It was shaped like a gray alien, but was semi-transparent and sorta smoky. Another time when I was 17 I was working in a small convenience store, when a "woman" came in to buy cigarettes. At first I didn't pay any attention to her until I saw her hand (when she handed me the money) - it was not like a normal human hand. This startled me so I looked up and saw a very pale entity, wearing a thin black coat (like a rain coat) with collar turned up to cover her neck, a heavy long haired wig, and very large black glasses. This did not entirely hide her strange face: a very pointed chin, scant lip and nose. She did not speak. Took her cigarettes and left! I was kinda stunned. Oddly I cannot remember the details of her hand (though it was the first thing I noticed). Nor do I think she left in a car which was odd since most patrons drove up the store (it was somewhat isolated).


Postscript: In a post on his Post-Human Blues, the belated Mac Tonnies compared my story it to other stories of odd encounters.
Posted by Kartott at 3/25/2009 11:16:00 PM