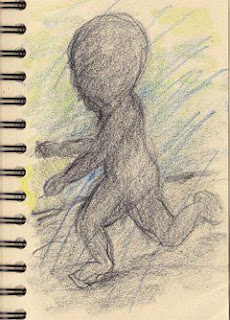 In the year 1996 (or thereabouts - it was in the late 90s) I attended a annishinaube "Gathering of Elders" pow wow at Cape Croker on the Bruce Peninsula in Ontario Canada. Long story how I ended up there (going back to an experience I had at the age of 10), but at the time it had to do with my interest in learning the language (which ultimately did not pan out). I had contacted Basil Johnston about an ojibwe language tape series he had created. In the course of our email correspondence, he mentioned the gathering, so my partner and I decided to attend. He suggested that we meet him thereafter to pick up the tapes.

The event itself was amazing. Several folks from other indian nations had come (annishinaube, 6 nations, and some far west), many elders, including one objibwe man I will never forget. He was completely blind, very old, and when it came time time for him to speak, he was led into the tent, very slowly, sat down, and, almost like a recording, starting telling the thousands-year old history of his people. I was entranced.
Later, an all night pow wow ensued. As the night went on, storm clouds came, the drumming and singing continued. At some point my partner and I retired to our tent, which was pitched not far from the edge of a bluff overlooking the georgian bay. We were attempting to sleep but the pow wow drum insisted otherwise. At around 2 or 3 am, the storm really broke loose, hard pelting rain with constant thunder and lightening over the bay (which our tent flap faced, looking east). The drumming seemed finally to stop, the players apparently giving into the storm. We were lying facing toward the tent flap (open except for the net cover; the wind and rain direction was coming from the west, so this along with a canopy over our door allowed us to enjoy the intense ozone and thundering of the rain, while watching the lightening over the bay. Suddenly something ran past our tent door in the area between our tent and the edge of the bluff. It was quite close, about 3 - 4 feet away. We saw it very briefly in a flash of lightening: a silhouette of a very small "man", about 18 inches tall. His head was very large in proportion to his body, his arms rather short (they were out in front as he ran). I was so shocked I was speechless for a moment. I noticed my partner had tensed up. We were kinda frozen for a some seconds. I remember my mind racing, trying to think of a rational explanation - could it be a squirrel, some other creature? Nothing came to mind that would explain what I had seen. I don't remember who spoke first, but one of us said "did you see that?" or "what was that?". We both started rattling off excitedly trying to understand what we had each seen, describing what few details we saw, trying to think of some animal that it could possibly be. We both had seen only the silhouette, no details as to clothing, facial or other features; just that it was running on two human-like legs, had a human like body (except for the head being overly large). We did not get out of the tent to examine the area - the rain was coming down very hard, the ground all about running with streams of water, so between the weather and our spooked feelings, we stayed put, eventually falling asleep.

The next morning, we went to meet Basil (who had a cabin on the reserve) to pick up the ojibwe language tapes. Since the encounter of the night before was so fresh in our minds, we asked him if he had ever heard of such a thing. He smiled and told us about the "pukwudjes" (not sure I have the spelling right, but roughly translated, it meant "little people" or "little wild men"). He said that though it was unusual to see one (I'm thinking maybe he meant especially a white girl like me), he was not surprised given the event of the night before. He said that they were known to be attracted by drumming; they would come out and hang about at the periphery of the woods listening and watching.

Thats it for the encounter at Cape Croker, but for another aspect to this event. Years before, around 1988, I had been involved with a yoga / meditation group, when during a particularly deep meditation one evening, I sensed an entity standing behind me. It placed its hand on my shoulders. This was immediately followed by a tremendous rush of energy down my spine, and my body being thrown from a seated position onto my back on the floor, shaking uncontrollably. Something had taken over my body and I could do nothing to make it stop. Others in my yoga group gathered around me, not knowing what to do. It probably appeared to them I was having some kind of seizure (I discovered in subsequent research that I had undergone an accidental kundalini awakening; at the the time I had never heard of this). I was both a little panicked that I could not make it stop, yet oddly calm and detached as I observed what was happening. A freezing/burning feeling had begun to move up my legs and arms toward my chest. It was the most intense feeling of rushing energy. As this got closer to my heart, I started seeing a vision of my (then) body in a distant past. I was lying in a shallow grave, my legs covered in animal skins. Snow was rapidly covering me. I was dead, but I was also standing (or floating?) alongside my (former) body, looking down at it. At this moment someone grabbed me up off the floor in a bear hug which instantly stopped the flow of energy like a light switch.

That night I had several highly realistic dreams. It was as if the lid had been blown off some energetic / consciousness connection, allowing me to see other times / other places. That night they mostly centered around a place in a very distant past. I was in a heavily forrested area, playing "peekaboo" with an odd little two-legged creature. This creature was not exactly human but intelligent. It reminded me of the Pan deity of greek mythology. I could vaguely make out details of fur on the legs, but bare human-like chest and arms. The face seemed covered in hair but facial features were difficult to see. I repeatedly awoke, convinced that I was actually physically present in the forest watching this little creature. I have no idea what that was about but after I saw the little man at Cape Croker, it later occurred to me that it was somewhat like the little creature I saw in my vision years before, mostly in terms of size and proportion of head to body.
Posted by Kartott at 3/29/2009 04:30:00 PM